The ban on smokable medical marijuana has officially gone up in smoke as of today, June 11, 2018. This is a victory for the majority of voters who were in favor of passing the new Florida marijuana laws. The next logical question is – “How does this affect me?”. Let’s take a look.

This is an important point that has, unfortunately, been lost among all the other excitement and news. Yes, the judge overruled a ban on smoking medical marijuana in Florida. That much is true. However, the Florida Department of Health still has several months of work to do before you can buy smokable cannabis products at a dispensary.

What this means is, legal medical marijuana ID card or not, if you’re found smoking or carrying part of the cannabis plant, you are subject to criminal prosecution. This will be true until the FDOH comes up with the list of regulations regarding its cultivation, distribution, and purchase.

Without receipts, even products bought legally can lead to trouble.

Florida marijuana laws state that patients must be able to produce an accurate receipt or certificate stating exactly where the marijuana came from along with other identifying papers. This can only be done by having a medical marijuana doctor in Florida add you to the state’s registry and update it with your personalized cannabis recommendation. In other words, cops know there’s nowhere to buy it legally right now and have the ability to give you a fine and/ or arrest you for it.

Other new Florida marijuana laws cover who is able to cultivate and grow the plant. The list is very short and there is a lot of red tape and legal hoops to jump through to get it. In fact, some of the Florida marijuana laws call for a multi-year license just to qualify to apply. The laws more or less state that if you haven’t been a registered grower for over a decade (a grower’s nursery must be at least 30 years old), you won’t even be considered.

This heavily limits who can actually grow their own cannabis products to sell legally to registered patients. Residential grow houses and personal cultivation are illegal. However, it appears that the lift of the ban on smoking was just the tip of the iceberg. You can expect more flexibility and changes to Florida marijuana laws to be on the ballot, soon.

Dosing is determined by a doctor, not you.

In the meantime, the best way to go about getting the medicine is talking to a certified cannabis physician. Their professional expertise and medical experience combined with a compassion to help those who are suffering will help you get what you need legally. The most common and popular selections include oils for vaping and edibles for eating.

Remember, if a doctor or someone else claims to sell smokable weed legally, you’re being lied to. Don’t become a victim and have your medical condition taken advantage of. Read Facts & Myths: All You Need to Know About Marijuana in Florida for more useful information.

For a chance to talk with a certified medical marijuana doctor regarding your condition, follow Woodstock Medicinal Doctors of Florida on social media and look out for a free medical marijuana seminar near you. 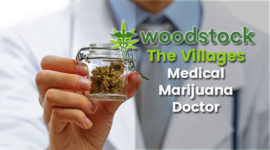