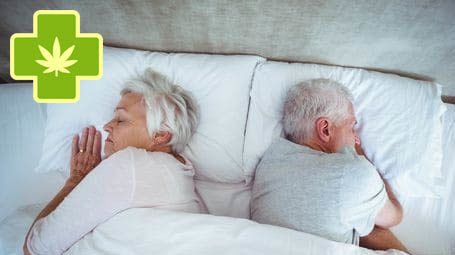 Sleep is essential for maintaining our mental and physical health, yet it eludes many adults. According to the American Sleep Association, 50 to 70 million U.S. adults experience symptoms of a sleep disorder. About 30 percent of the population will experience insomnia at some point in their lives, and about 10 percent of adults will deal with chronic insomnia. So if getting shut-eye is becoming harder and harder, you’re not alone.

With so many people experiencing sleeping disorders, there’s been a rise of interest in one controversial cure — cannabis. Many in the medical marijuana community refer to cannabis as an effective treatment, with little to no side effects, for a range of sleeping disorders.

Whether you have a sleep disorder or you’re having difficulty sleeping after a stressful day, cannabis could help you. Marijuana’s analgesic properties might provide some relief for those with chronic pain, while the anti-anxiety properties can soothe a stressed out mind and body.

The science of sleep via cannabis

First, here’s a quick primer on the science behind marijuana. This herb works because it contains different cannabinoids, two of which you’ll see most often:

Cannabidiol (CBD)
CBD has a number of health benefits, and is non-psychoactive, meaning it doesn’t cause you to feel “high.”

Tetrahydrocannabinol (THC)
THC, a psychoactive cannabinoid, is primarily responsible for that “high” feeling.
Something else THC is responsible for? Inducing sleep. So you’ll want a strain that contains more THC than CBD.

According to a 2008 study, ingesting marijuana strains with higher levels of THC typically reduces the amount of REM sleep you get. Reducing REM sleep means reducing dreams — and for those who experience PTSD, it could mean reducing nightmares.

So the theory is that if you spend less time dreaming, you’ll spend more time in a “deep sleep” state. The deep sleep state is thought to be the most restorative, restful part of the sleep cycle.

We are compassionate physicians with expertise in medicinal marijuana treatment and care.